Minneapolis – Not just cold but cool

This year, I had the tremendous opportunity to help plan a conference for news media professionals and journalists in Minneapolis.

And it was cool. As star resident, Prince says, so cool.

We partied at First Avenue, the legendary nightclub in Prince’s “Purple Rain” with a stage once graced by the legs of Tina Turner. That was pretty great but the real excitement came a week later when part of the roof caved in. Whew, we were lucky.

I appeared on Urban Perspectives on WCCO. I felt inspired that morning because good things do still happen in our cities. 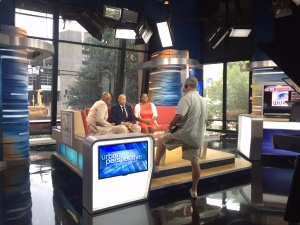 Urban Perspectives with Pete Rhodes hosted me and several others.

You see, the difficult hurdle in planning five days of programming – beyond budgetary constraints – was that very few A-list speakers just decide to pass through Minneapolis. It’s not like Philadelphia where someone will make a stop on a trip headed north to NYC, or pop off the Amtrak on their way to D.C. to present a panel.

Yes, Prince lives there but his booking fee is $1 million and while he invited us in, we could not even coax him to play a single song when we visited Paisley Park Studios. We got a DJ instead and didn’t she know all I wanted to hear was Prince? And I violated his rules. I snapped a pic while in front on his Purple-badness studio.

And like a tourist, I took the $2 train ride to Mall of America. Ate with the husband and bought a few things. It was a must-do. If I had more time, I definitely would have pursued water sports. Lesson here: A trip is what you make it.

Getting to Minneapolis as a friend mentioned to me today, cost them $750 for flights. It is off most people’s beaten paths.My friend’s next trip is Chicago, and guess what that cost? $80, round-trip. So you see, just dropping into the Twin Cities is not just something you do.

You have to plan it.

But once there you can definitely feel so cool.